India has much less violence against conversions compared to other countries. India clearly understands that physical violence by its government or by its citizens against Islam and Christianity is not the solution to stop conversions. India knows that it backfires. India realizes that in this day and age it needs ‘intellectual kshatriyas’. India believes that ‘Sarve Bhavantu Sukhinah’ or ‘Jana Kalyan’ is the only right way prescribed by Hindu scriptures to protect Sanatana Dharma. Many Indian organizations are working very hard for ‘Jana Kalyan’ for all Indian Hindus and non-Hindus. Such organizations need monetary help. If every Indian and Non-Resident Indian chip in with love for our motherland we can definitely stop conversions.
India harvest
India | Joshua Project
https://joshuaproject.net/countries/IN
Joshua Project India and Christian Terrorism
Kerala: Myth of Saint Thomas

No Conversion‏ @noconversion Oct 19
By 1559 Portuguese missionaries ordered the destruction of ALL Hindu temples. In 1567, in Bardez 300 Hindu temples were destroyed. From 1567 Hindu rituals, including marriages cremations, were banned in Goa 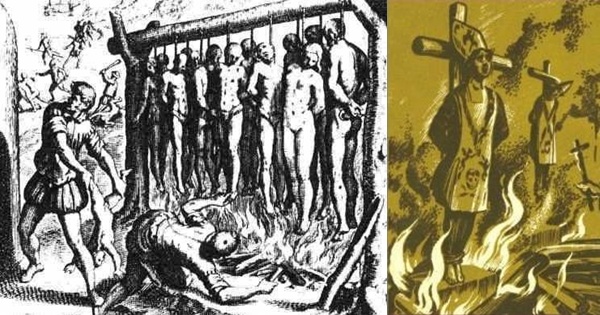 Hatkatro Khaamb: A lone pillar that stands witness to the horrors of … 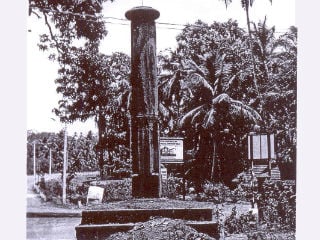 Every time anyone visits the Mangeshi temple (the Kuladevata of Lata Mangeshkar among many others), one can find this marble slab at the entrance for everyone to read. Goa Inquisition
The Portuguese Inquisition in Goa: A brief history | IndiaFacts
The Vatican Has Never REALLY Apologised For Any Of Its Crimes, And Neither Will It For The Goan Inquisition 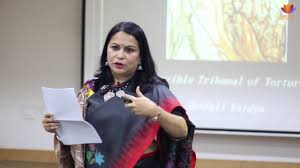 State of the Indian States
BJP leader seeks minority status for Hindus in 8 states, files PIL in SC
Kerala
‘Kerala will be Islamic State in 20 years’

Tribals (Vanavasis) of India
To stop ‘tribal conversion’, Adityanath outfit to take on Christian missionaries
The Rapid Christianization of Tribal Regions of Central India-the Story in Numbers | IndiaFacts
Why are the tribal regions of Central India being Rapidly Christianized? | IndiaFacts
New York Times’ Misleading Claims about Hinduism | IndiaFacts
Christian tribals tops list of fastest-growing demographic groups in India
ORPs In Jharkhand | IndiaFacts
Religion Data of Census 2011: Jharkhand And Reversal of the imbalance | IndiaFacts
Religion Data of Census 2011: The Case of Bihar | IndiaFacts
North East states, India
Religious Demography of the Northeastern States of India: Trends to look for the census
http://www.asthabharati.org/Dia_Jan%20011/j.k..htm
Christian Terrorism in Northeast India: Stephen Knapp
Danger In North East: Christian Terror On One Side, Islamist On The Other
Christian Conversions and Terrorism in North-East India – Christian Aggression
Conflict Resolution in North East India: Perspective of the Kuki Christians | Kuki International Forum
How did some states in India’s Northeastern region end up getting a Christian majority? – Quora
Conversions and Terrorism in North-East India –

Assam
Will Assam be a Muslim majority in the next 40 years? | IndiaFacts

Conversion of Hindus by Rajiv Malhotra at Art of Living HQ

Christianity in India
Pravin Togadia
‘They Want A Christian Homeland’
Bharavi India
Contemporary negationists of the Abrahamic doctrine | IndiaFacts
Haindava Keralam India
Estimated Rate of Conversion to Christianity in India – Can you guess?
Sulekha.com
Ten ways to convert a Hindu: Shocking insight into a Christian missionary’s agenda | Sulekha Creative
Hinduism Now
Over one million people Converted to Christianity at a single event in India: Feeding Poison to Indians

The Muslim population in India rose by 24% between 2001 and 2011: Census | Latest News & Updates at Daily News & Analysis
The Rediff On The NeT Special: Figure this out: The truth about Hindus and Christians

Though the Christian church in India goes back to the time of St. Thomas the Apostle, church growth in India has been slow until now. India is predominately Hindu (74%), with some Muslims (20%) The truly exciting thing is that the percentage of Christians has increased substantially from 2.5% a decade ago to about 5.8% today. That represents a huge increase in the growth rate. Something is happening!

Missiologist and church growth expert C. Peter Wagner has been receiving reports that the percentage may actually be 25% Christian — at least in parts of this large country — most of the growth coming in the past 10 to 15 years. And the growth may not all be in traditional churches. A substantial part may come from Jesus-follower groups within the Hindu culture.

In this huge and very diverse country, it’s difficult to get accurate statistics regarding religion, but anecdotal stories indicate exciting changes. According to Christianity Today, Operation Mobilization, one of India’s largest missionary groups, has grown to include 3,000 congregations in India, up from 300 in less than a decade. A hospital-based ministry in north India has seen 8,000 baptisms over the past five years after a decade of only a handful.

“Everybody knows about the massive scale of growth among Dalits,” says Operation World’s Jason Mandryk. Somewhere between 70% and 90% of Christians in India are Dalits, low-caste groups, so that much higher caste Hindus view Christianity as a low-class religion, worthy of contempt.

“Now we see signs of growth in the middling castes and among the under-35s,” Mandryk says. “There’s a new dynamic for the urban, educated generation. There’s growth happening in upper castes as well.”

Wagner writes, “It is becoming more and more common for whole villages or other people groups to all decide to follow Jesus Christ together at one time.” There are reports of both new churches and traditional denominational churches seeing signs and wonders in the Spirit.

However, there is intense persecution from a radical Hindu movement that is afraid of the growth of Christianity. You hear of churches being burned, of pastors being persecuted — and occasionally killed. But, in a way, Hinduism is its own worst enemy. It is based on a caste system in which the top 15%  dominate the country. Christianity is beginning to declare that “the gospel is a message of deliverance, not just for heaven. It is a message of freedom. The truth is that God made man in his image.” And that message of deliverance seems to be catching on across India.

The key to this growth seems to stem not from some charismatic leader, political change, a major scandal in Hinduism, or social upheaval, but from intercessory prayer! I encourage you to make India a personal prayer focus. Pray for congregations, for leaders, for evangelism, for disciplining new believers, for converts from both Islam and Hinduism. God is at work in India.

Over one million people Converted to Christianity at a single event in India: Feeding Poison to Indians
India’s Christian population explodes in an inspirational burst of faith – Living Faith – Home & Family – News – Catholic Online
Christian Church growing at a rapid rate in India – The Layman
Is India the Fastest-Growth Gospel Territory?

Christianity Grows in India Despite Anti-Christian Violence from Hindu Activists

Percentage of Christians in India

Vatican
Catholic Church accused of promoting a theology of ingratitude
Pope Francis: an eyewash or a new beginning? | IndiaFacts
White Smoke – Black Record!
The Vatican Has Never REALLY Apologised For Any Of Its Crimes, And Neither Will It For The Goan Inquisition
Vatican Reinstates Molestor: Not The First Time The Church Has Done A Cover-Up
The Pope and Extra-Terrestrials
Modi, the Pope and the ‘Problem’ of Science
The Vatican’s Deepavali Message: A Hindutva Perspective
Secular defense of Mother Teresa | IndiaFacts
Recall Bhopal Tragedy To Know Real Teresa
Christian Politics in India
The Legacy of Christian Politics | IndiaFacts
The Anti-Hindu orientation of the Indian National Congress
Why KCR’s domicile stunt is dangerous for Indian Union’s integrity | IndiaFacts
C Umashankar – Christian canker in IAS clothing | IndiaFacts
Here’s Why Umashankar IAS Must Be Stopped
The Silent Control Of The Church On Tamil Politics
Tamil Nadu Elections: Islamism On The Rise
http://indiafacts.org/why-is-sonia-soft-on-islamic-terror-part-1/

Why is Sonia soft on Islamic terror: Part 2 | IndiaFacts

When Germany is Christian, is India Hindu?

Census: Religious Demography
Some experts say….
The percentage of Christians has increased substantially from 2.5% a decade ago to about 5.8% today. That represents a huge increase in the growth rate. Something is happening!
Changing Religious Demographic Contours of India: A Talk by Dr. JK Bajaj

Dr. JK Bajaj – Changing Religious Demography of India: the Imbalance continues to worsen
What was the reason for the Partition of India? – Dr. J K Bajaj – India Inspires Talks

What is the significance of changes in Religious demography in India? – Dr. J K Bajaj

https://www.indiastat.com/demographics/7/religion/293358/stats.aspx
Which state has more Christians in India? – Quora
https://www.importantgk.com/indian-population-religion-wise-2017/
India’s Census Reveals 2.87 Million People Who Are Non-Religious
Population Of India – SlideShare
Population Of India
Live India Population Clock 2017 – Population of India Today
Why Christianity failed in India
Why Christianity Failed In India
Why were Indians not mass converted to Islam/Christianity?
‘The Christian mission has been a complete failure’, says Fr Augustine Kanjamala |
Census of the World
World Population Clock: 7.6 Billion People (2017) – Worldometers
Countries Compared by Religion > Religions. International Statistics at NationMaster.com
Regional Distribution of Christians
The Future of World Religions: Population Growth Projections, 2010-2050
Fastest Growing Religion In Each Country Around The World
https://www.weforum.org/agenda/2016/05/fastest-growing-major-religion/
In the Next 50 Years, Muslims May Overtake Christians as the World’s Largest Religious Group
The population of Shia: How many Shia is there in the world?
Statistics by Country, by Catholic Population [Catholic-Hierarchy]
Twentieth Century Atlas – Historical
How religious will the world be in 2050?
—————————————————————————————–